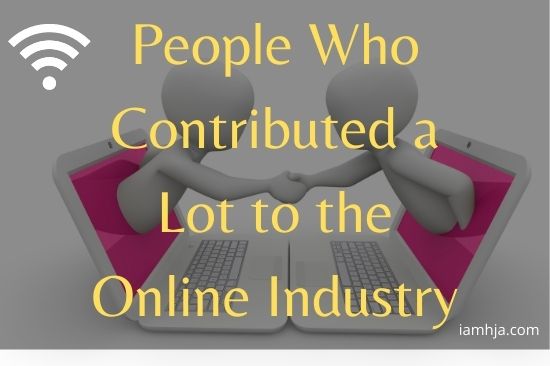 Home Tutorial People Who Contributed a Lot to the Online Industry

Internet was created in the 1960s by ARPANET, and many men’s thoughts went into its creation. As we are well aware, our generation and the ones to follow cannot live without the internet, as we are very much dependent on it, be it for work, entertainment, education and even accessing the super-smart gadgets that make our lives easy.

However, when we study the history of the internet, some incredible women made it what it is today. For example, imagine using the internet with a speed as slow as that of a turtle walking – a page on loading for ten minutes or so, you will be frustrated even imagining it! Many things contribute to the making of the internet and then its advancements, which have led to an easy virtual life for us and have made the world a globally connected place and we can owe this to some women.

Since these girls have dedicated a lot, it is only fair that you invest in the best internet bundle to make the most out of your internet experience.

Without much ado, here are some special women who we can thank, for adding virtual color to our lives when it comes to revolutionizing healthcare, media, tech, and other industries.

The internet would literally not exist if it were not for the “Mother of the Internet”, Radia, a software designer, and a network engineer, who created the spanning tree protocol (STP). STP bridges two computer networks together so that they can create a map and exchange data amongst each other.

It even enables large chunks of information to be transferred. Radia did not just stop there; she worked even on STP’s shortcomings and gave birth to Transparent Interconnection of Lots of Links (TRILL). Although this network is a little different from how we use the internet today, the idea of unified computers and interlinked networks was taken from this particular invention.

With the advancements in technology, today we get to enjoy super-fast internet speeds and all the credit goes to Radia Perlman. If you are looking for a high-speed internet connection, we highly recommend Spectrum Internet as it comes with incredible speeds and unlimited data to keep you connected to the web at all times.

An average person opens Google at least once every two days if not everyone day to search for something.

A major chunk of the internet and its users are dependent on Google and its platform however long before Google existed or Go Daddy allowed one to make any websites, Elizabeth Feinler was there. She was the director of NIC and did the research for Stanford, which led her to manage ARPANET, the company that founded the internet. Her job was to manage the registration of internet URLs. If it were not for Elizabeth, we would have led tedious lives!

Imagine having to send photos through email and if the email attachment is too large, then waiting to send a couple of photos every five minutes! How awfully long and tiresome would the procedure be? It is even tough to imagine photo sharing like this in a time where Instagram exists. However, before Caterina and her husband created some wonders this is what people did; shared photos via email.

Caterina created the system of ease of photo sharing through the application Flickr. This creation also somewhat led to the beginning of social media. Fun fact: Yahoo! bought Flickr In 2005.

We are all aware of the memes that circulate on the iconic Internet Explorer that is installed in all of our devices and we never use it. It is known to be slow.

However, we would still be using it, if it were not for this remarkable person Mitchell who invented Mozilla Firefox. Even though most people now use Chrome on Windows and Safari on Apple Devices but for the longest time, people escaped Internet Explorer by replacing their browser with Firefox. Hence, it is safe to say that it was after quite some time that other browsers made their way to us.

Most of us, in fact, none of us would be aware of Pownce, an application similar to Twitter, which even then was Twitter’s biggest competitor. It was Pownce that allowed users to share and attach links as well as photos and videos on platforms. All of these features are now found in most social media applications. Pownce may have met its demise in 2008, but if it were not for Leah Culver working there who allowed these features to roll and turn her ideas into reality, we would not have had any such thing as Facebook, or Twitter, etc.!

This capable and extremely talented woman was associated with Google in 1999. She was actually Google’s 20th employee and the first female engineer they had on board. She played a major role in creating and expanding Google Search, Google Chrome, Google News, and Google Images. She is now the president and CEO of Yahoo! She is also known for her expertise in user experience as she has helped work on programs based on enhancing them for usability and offering a smooth user experience.

How to Protect Healthcare Data from Getting Leaked?

270+ Best Cheese Puns and Cheese Jokes for Everyone